Throughout the planning process, there were multiple opportunities for the public to participate and provide feedback. We held five large-scale community events and an online community check-in, as well as dozens of tours, presentations and community conversations.

STAY UP TO DATE BY JOINING OUR EMAIL LIST HERE 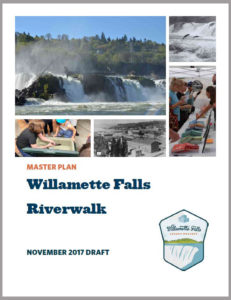 Willamette Falls is one of the nation’s most beautiful and historic natural wonders. The second largest waterfall by volume in North America, it has long been an important cultural and gathering place for Native American tribes. Industrial development, beginning in the 1830s, blocked the Falls from public access and greatly modified the riverbank with man-made industrial structures. The Blue Heron Paper Company was the most recent in a succession of various industries that nested itself on the east bank of the Willamette River at Willamette Falls. The closure of the paper mill in February of 2011, due to bankruptcy, allowed the opportunity to bring public access to the Falls for the first time in more than 150 years.

Following the paper mill’s closure, the City of Oregon City, Clackamas County, Metro and the State of Oregon joined together as Project Partners to form the Willamette Falls Legacy Project. These four government agencies have partnered since 2012 to establish and carry out a vision for the 22-acre site and reduce and remove barriers to redevelopment. A key feature of the vision for the project site is the creation of a world-class riverwalk to allow for public access and viewing of Willamette Falls.

The Willamette Falls Legacy Project site in Oregon City contains more than 50 industrial buildings, various degraded natural habitat areas, and is partially within the Willamette River floodplain. At the southern end of the project site, and on Willamette Falls itself, is a dam owned and operated by Portland General Electric (PGE). The site presents many opportunities and challenges. Opportunities for the riverwalk include strong ties to Native American tribes and culture, a site rich with the history of the Oregon Territory, the industrial west and power generation, and a fully operational dam walkway that can draw visitors close to the Falls to feel the mist and hear the roar of the water. Challenges for site development include hazardous building materials, flooding risks, state and federal protection of fish and wildlife species and dam operations.

In 2014, Falls Legacy LLC purchased the mill site and donated an easement along the shoreline to Metro for the purposes of building a public riverwalk. Metro has taken the lead in riverwalk design using funding from its 2006 Natural Areas Bond, along with contributions from the other three agency Partners and the private property owner. Guided by the project’s four core values of economic redevelopment, public access, historical and cultural interpretation and healthy habitat, the riverwalk design began in 2015. Robust community engagement has shaped the riverwalk conceptual design; thousands of people have participated in events, surveys, tours and meetings related to the Willamette Falls riverwalk.

Based on community and site owner input as well as technical studies and conservation science, the recommended riverwalk plan takes inspiration from the power of the Falls, selectively carving away concrete, steel, wood and stone from the project site to reveal the rich cultural, ecological and geological layers of history aggregated on the site.

The Willamette Falls Legacy Project site lies within an area of the Willamette River watershed that Metro and other conservation groups have identified for important habitat restoration and boasts several rare native plant species that thrive in the mist of the Falls. Improvements made to create healthy habitats and enhance natural environments can make a big difference for salmon, steelhead and Pacific lamprey migrating past the site. The riverwalk is expected to be a catalyst for the redevelopment of the remainder of the site and for economic improvement in adjacent downtown Oregon City and neighboring West Linn. Throughout the riverwalk design, public spaces intertwine with redevelopment parcels and buildings in order to increase to economic viability. Pathways and promenades connect islands of re-used industrial structure and large areas of restored habitat. Exploring the site, visitors will travel through a rich sequence that celebrates Willamette Falls in its fullest depth of nature, culture, industry and time. The design includes the following elements:

The overall concept will be constructed in phases, with Phase 1 beginning once the Partners reach an agreement with the private property owner. Phase 1 will include habitat restoration, historic and cultural interpretative elements and open public access closer to the falls. Phase 1 will focus demolition and site preparation in the Yard and Mill Reserve areas and provide a viewing area in the Mill H building and Boiler Plant complex.

The project has also spurred the creation of a 501(c)3 nonprofit friends group, Rediscover the Falls, that is dedicated to advancing the Willamette Falls Legacy Project through building friendships and fundraising.

Keeping the four core values of economic redevelopment, public access, historical and cultural interpretation and healthy habitat as a guide, the riverwalk will be one of the many transformations of this site over time. Metro and the Project Partners are writing a new chapter--one that honors history, provides healthy habitat, fosters the economic development opportunities and connects people with downtown Oregon City and Willamette Falls.