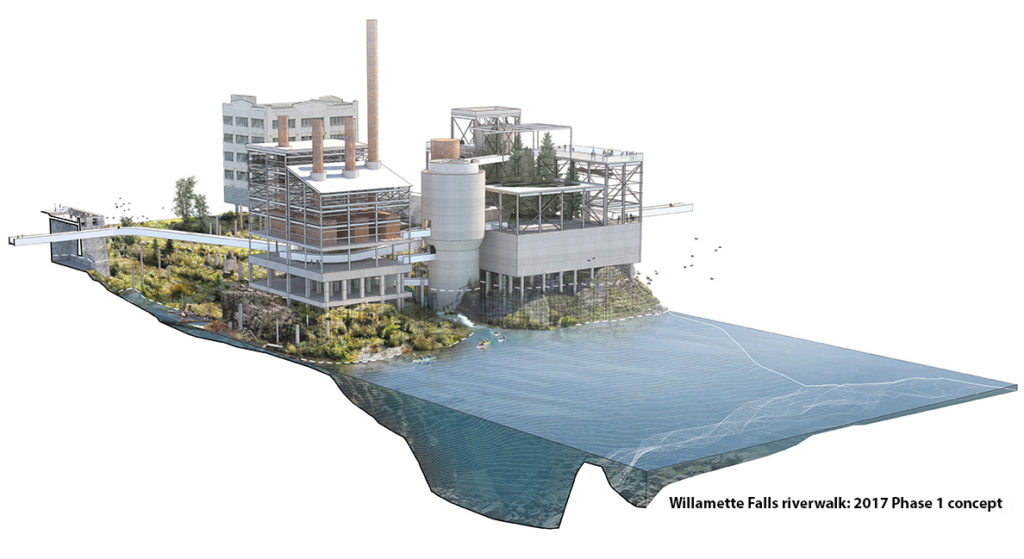 Willamette Falls Legacy Project Partners today gave the green light to staff to continue refining the scope of the first phase of a public riverwalk to fit within the funding that’s available. The project team asked for direction after receiving cost estimates showing that jump-starting the riverwalk will be more expensive than an initial projection from architects.

As the Willamette Falls Legacy Project moves forward with the riverwalk design and engineering, current estimates by Otak and Lease Crutcher Lewis indicate that the cost to build the first phase could be between $17 million and $33 million, depending on the scope and scale decided upon for the current phase. That’s more than the $12.5 million budgeted over three years ago, prior to the development of any designs.

Estimates are still being refined and a final cost for the project won’t be known until next year.

The riverwalk is proposed as a public space and interpretive site on the basalt shore of the Willamette River, hugging the former Blue Heron paper mill in Oregon City and bringing visitors up close to what is currently North America’s second largest-volume waterfall. (The prior second-largest waterfall, Celilo Falls, was submerged by the United States’ construction of The Dalles Dam.)

Project partners – Oregon City, Clackamas County, Metro and the State of Oregon – hope that opening up the riverwalk will spur economic development in downtown Oregon City, including unlocking the private development potential of the Blue Heron site. They also envision helping teach visitors about the history of Willamette Falls, from its importance to Indigenous valley residents to its role in the founding of Oregon’s modern economy.

Renowned international architecture firm Snøhetta designed the riverwalk with extensive community input, and projected construction costs to be $12.6 million for the first phase – roughly the amount available for construction within the project’s $25 million Phase 1 budget. The team will continue to refine the design and cost estimates to allow the project’s partner group to consider options that include reducing the scale of Phase 1, closing the funding gap, or some combination of the two.

Metro has said it would allocate $20 million to Willamette Falls if voters approve a proposed 2019 parks and natural areas bond measure. The bond measure, which would maintain the current tax rate of $0.19 per $1,000 of assessed value, is on the November 2019 ballot.

About $12 million has already been identified for construction from a budget that includes $1.2 million from Oregon City, $5.1 million from Metro, $12.5 million from the State, about $500,000 from Clackamas County and the property owner, and $6 million fundraised by Willamette Falls Trust, a nonprofit working to support the vision at Willamette Falls.