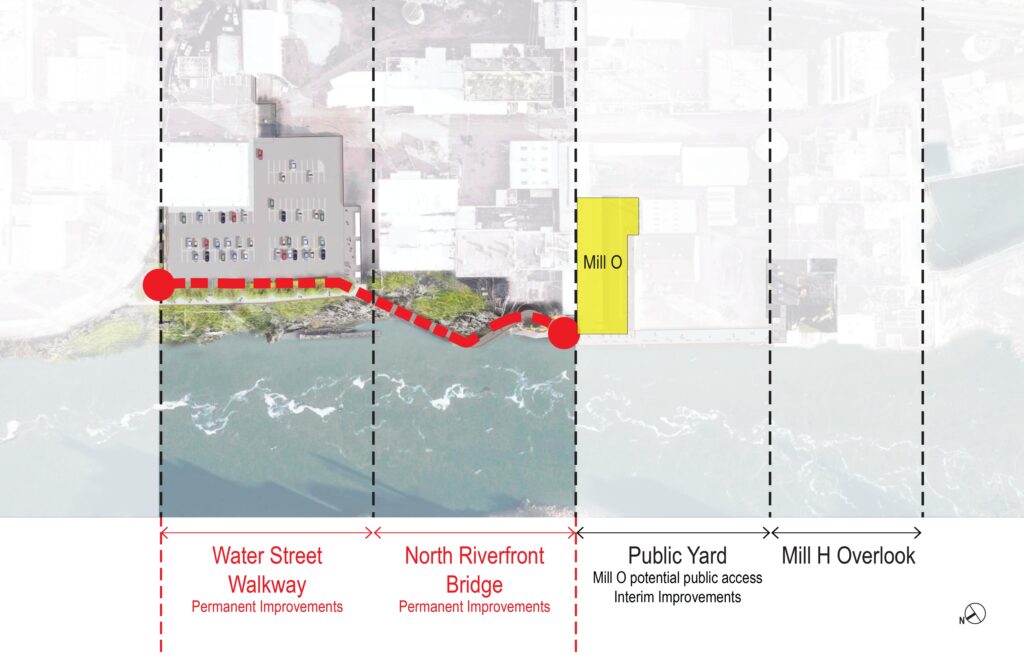 The approach for the first phase will include habitat restoration and public access improvements, leading visitors along the river from McLoughlin Boulevard to a landing at the north end of a future public gathering place. The larger Willamette Falls overlook, designed in 2020, would be built in a future phase.

At a Feb. 4 meeting of the Willamette Falls Legacy Project, public officials approved moving ahead with the concept pending formal riverwalk support from the Confederated Tribes of Grand Ronde. The concept, with further refinements, is estimated to cost $12.5 million to construct, with funding already secured.

“We’re making really great strides forward for something that’s going to benefit everyone at the table. And it’s going to benefit Oregon. This is a destination site and it makes me excited,” Oregon City Commissioner Rachel Lyles Smith said at the Feb. 4 meeting.

With approval for the first phase of the riverwalk, the Willamette Falls Legacy Project will begin efforts to develop and refine a Phase 1 design. Project staff will continue engaging with tribal governments to inform the design, resulting in permit level drawings.

The Willamette Falls Legacy Project is a partnership between Oregon City, Clackamas County, Metro and the State of Oregon. Since the Confederated Tribes of Grand Ronde purchased the former Blue Heron paper mill in summer 2019, the Willamette Falls Legacy Project team has worked alongside the Tribe to align plans for phasing the riverwalk in a way that meets funding constraints and public commitments, while supporting Grand Ronde’s priorities for private development.

“I think we’re seeing the culmination of a true collaboration,” Lyles Smith said.

This concept for the first phase also paves the way for the project to move into a second phase. Money from Metro’s 2019 parks and nature bond measure, the Willamette Falls Trust, and additional commitments from Oregon City and other project partners will provide the funding for a second phase. Design completed on the project to-date can be used to jump-start design for a phase 2.

The next Willamette Falls Legacy Project Partner meeting is tentatively scheduled for Feb. 24, 2021.