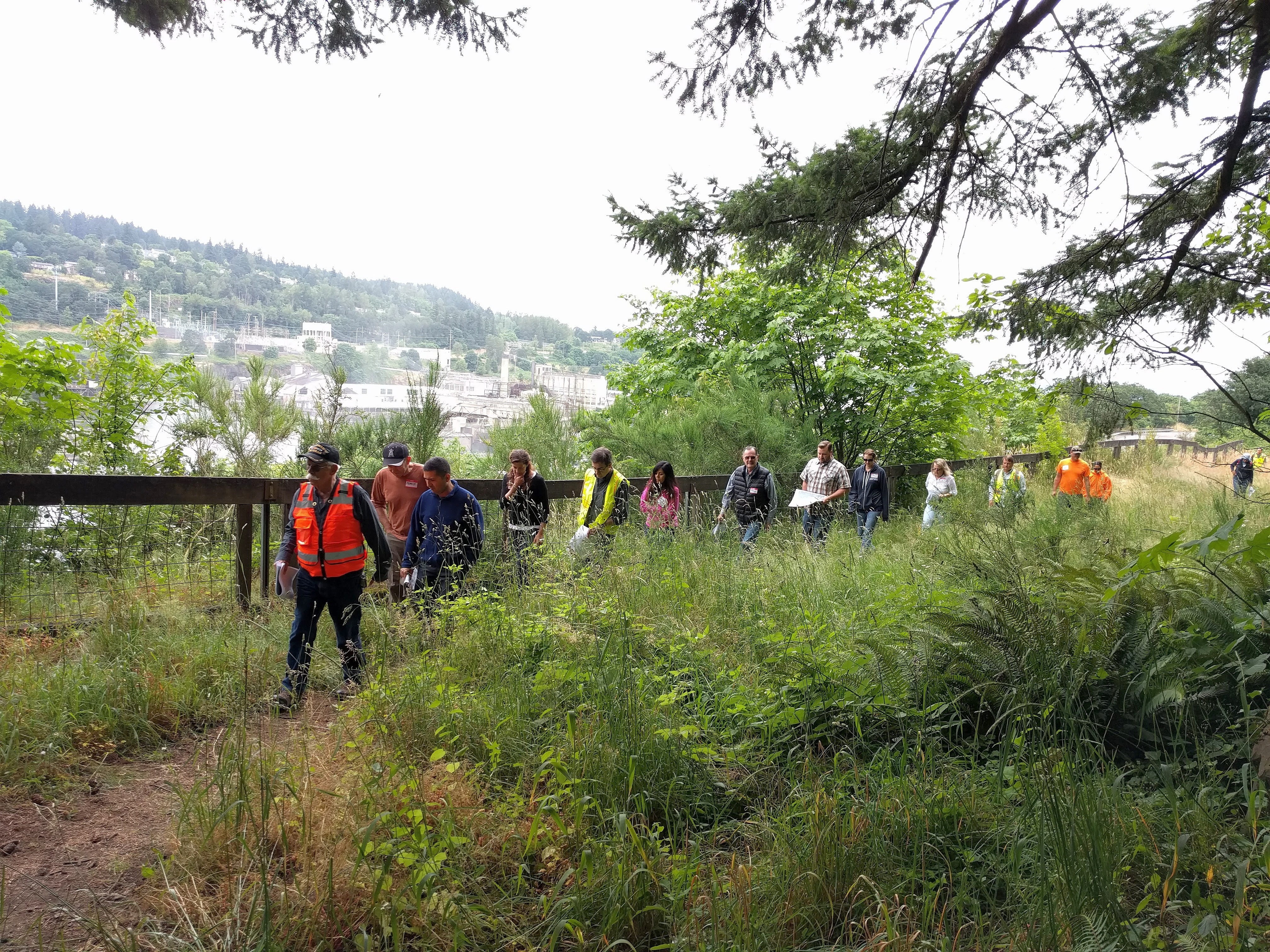 The riverwalk design, just unveiled last month, includes a pedestrian bridge over Highway 99E and the railroad tracks to the McLoughlin Promenade. The McLoughlin-Canemah Trail Plan project aims to connect the riverwalk and McLoughlin Promenade to Old Canemah Park and Canemah Children’s Park with a shared use trail.  The City won a grant from Metro’s Nature in Neighborhoods grant program last year, and is now working on the trail plan and design.  The area’s topography, constrained space for a trail corridor, and conflicts with fast moving vehicle traffic will be challenging. Nonetheless, Phil Lewis, the City’s Community Services Director, is encouraged by the level of interest from neighbors in the area. “The corridor between the McLoughlin Promenade and Canemah Children’s Park is an important recreation and transportation connection for Oregon City.  The Community Services Department is excited to work with neighbors and stakeholders to create a plan for a safer and more accessible connection between two of our most loved city parks.”

As part of the trail planning process, the City of Oregon City is hosting a Greenway for a Day in the historic McLoughlin and Canemah neighborhoods on Saturday, July 29.  The event, held from 9 a.m. to 1 p.m., will feature a temporary marked trail between the Museum of the Oregon Territory and Canemah Children’s Park.  The one-mile Greenway will be marked by cones, balloons, temporary stencils, and volunteers, and streets within the Canemah neighborhood will be closed to through-traffic.

The McLoughlin-Canemah Trail is also a small segment of the proposed Oregon City Loop Trail, which has been on the books for years.  An advisory group of local community members is working with the City to determine the trail alignment and design this summer. One member of the advisory group is Jessica Smith, a Canemah resident. "I love this City where we run our Main Street family business and the small offshoot called Canemah where we've lived for the last decade. With the continued growth of Oregon City and the eclectic Canemah community evident, I joined the trail project to help our community embrace the inevitability of change." Jessica says.

At the Greenway event, trail planners will be gathering input from community members at stations along the Greenway and will give away prizes for people who complete the trail.  At the same time, the Oregon City Parks Foundation is partnering with the City to clean up ivy at Old Canemah Park.  From 9 a.m. to 11 a.m., volunteers will pull out ivy that has overtaken many of the trees in the park.  Jerry Herrman, a local advocate and Parks Foundation member, says of the ivy, “Ivy is a plant of great concern now. It had uses many years ago stabilizing river banks, but it has gotten way out of bounds in our temperate climate. It is time to get it back in bounds.”

Partnerships abound for this project.  The Museum of the Oregon Territory will be hosting one of the Greenway stations in their parking lot and will offer 2 for 1 museum admission during the event. Portland General Electric, which operates a substation along the Greenway route, is working with the City to provide safe access through the property and is participating on the advisory group for the McLoughlin-Canemah Trail plan.  SOLVEOregon is helping to coordinate the ivy pull.

For more information about the McLoughlin-Canemah Trail project and the Greenway for a Day event, see https://www.orcity.org/planning/mcloughlin-canemah-trail-plan

To sign up for the ivy pull at Old Canemah Park, see http://solveoregon.org/get-involved/events/old-canemah-park-ivy-pull